I’m going to get this out of the way right now, because I know more than a few of you were wondering. I love ranch dressing. Like, an unhealthy amount. As in, sometimes, when no one’s looking, I pull out the little bottle I keep in my pocket and take a sip. And by sip, I mean mouthful.

I’m neither of these people, but I’d be lying if I said I haven’t done this before. And enjoyed it.

So now you know.

I think we can all agree that we think of ranch houses when we see ranch dressing, or visa versa. What with the aforementioned ranch dressing flask I keep with me at all times, I think it goes without saying that ranches are on my mind a lot, both the houses and the dressing. And let me tell you right now – it is a weird state of mind to be in.

But you know what isn’t weird? Ranch houses. They’re quite the opposite, actually. They define simple. Last week there was a post from April about bungalows, and how they became popular for the lower middle class right after WWI. Well, ranch houses were popular for a lot of the same reasons, at the same time, but for the middle class. They were the upgrade to bungalows.

Ranches went through a couple evolutions, but the style essentially remained the same. Single story, long and low, attached garage, simple/open floor plans, sliding glass door leading to a patio, large windows, simple/rustic interior and exterior. You might have noticed I used the word “simple” twice in the description. Not a mistake. 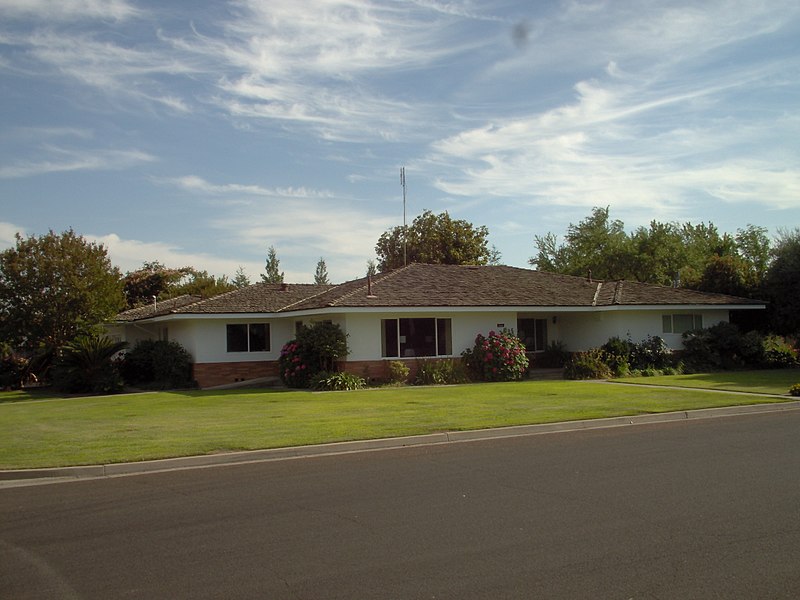 But as we learned last week, simple houses definitely aren’t a bad thing. I remember April using words like “cozy” and “intimate” and probably “cozy” again. Ranch style homes took the good points of bungalows and just sort of stretched them out a bit. They focused on large living areas and bedrooms, eat-in kitchens and good-sized yards. Between ranches and bungalows, almost the entire image of a family at that time was defined.

Around the 70s, however, neo-eclectic homes had become the home of choice after elements of the style had spent a few years diluting the simpler ranch designs. At that time, land prices were rising, so it became less practical to build the single-story ranch. Traditional houses, fusing the grandeur of older Victorian homes with the modern appeal of ranches, became the go-to design.

During the late 90s, though, ranches saw a bit of a revival, mostly through a process called gentrification. Basically, gentrification is the process of the rich purchasing houses that may be considered beneath their normal buying level, then upgrading them. These upgrades increase the value of the home and surrounding property, making it difficult for the current level of income families to stay in the area. They move away, the rich move in. Gentrification.

Anyway, late 90s and ranches were going through gentrification mostly, but they were also catching the eyes of both young home buyers attracted by the low price and simple (that word again) design, and also older couples who needed a house they could easily navigate as they aged. They don’t enjoy quite the popularity they had in earlier decades, but are still a desired style for many people.

So if you’re interested in coziness and intimacy and coziness again, with some room to move around in, we’re the clear choice. Call us and we’ll design you a ranch house. We can discuss the plans over an ice-cold glass of Hidden Valley.