So last week, we went over the Queen Anne style, which incorporated most of the better-known features of Victorian architecture. Today, as promised, we’ll be looking at Shingle Style, my personal favorite.

You know that first year of college, and everyone’s bending over backwards to look like they’re the coolest person on campus, but by the time they hit their senior year, they’re more defined and mellow? They’re thinking of getting married, holding down a job, following their dreams in a realistic way, but you can tell they used to be the life of the party. That’s the Shingle style, compared (by use of a ludicrous analogy) to the rest of the Queen Anne club.

Shingle style draws heavily from Victorian architecture and is, technically, of the Queen Anne family, but with none of the manic, heavy-handed ornamentation. Part of the much-talked-about Arts and Crafts movement, there is a fundamental difference – it’s American.

Look past the influences, obviously. Shingle style came into popularity as an idea birthed and nurtured in the United States, not a fad adopted from across the ocean. Even our Arts and Crafts movement had an entirely different purpose than the one Tom spoke of for Tudor Revival. Instead of going back to the basics of hand-manufactured materials, America, not having much of a history to draw on, used their Arts and Crafts movement to educate their citizens, establishing a higher quality and unity in middle-class homes.

Which is kind of ridiculous when you get right down to it. Hard to imagine any of these homes as being “middle-class,” but there you go. 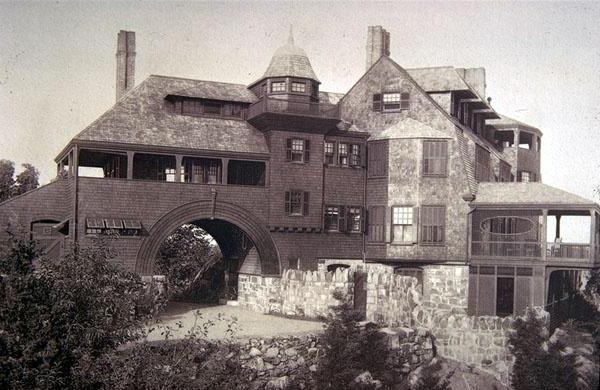 Kragsyde, one of the most famous shingle style homes. To achieve a "weathered look" they would dip their shingles in buttermilk before putting them up, for a greyish, older look. No really.

Allow me to lay some of my sarcasm aside for a moment, but shingle style houses are beautiful, and they pull it off with less. They have that regal, mansion-esque quality you wouldn’t find in, say, colonial or bungalow, so they still seem impressive, but there’s a subtle elegance in them that you just don’t find elsewhere.

Being Victorian and a member of the Queen Anne family, you’re going to see the same types of features as I pointed out in the last post. The difference is that the architectural features are allowed to shine on their own, without all the clutter. Asymmetrical facades, irregular and steeply-pitched roofs, beautiful, detailed windows, maybe even the occasional tower, etc. Shingle style homes tend to also have a particular look, as if a smaller home had been added to several times, giving a unique “massed” feel.

Personally, I like to see a shingle style home based with stone to give it a solid, immobile feel, shingles atop them that flare out like a bell. The style of that curve is reflected in the slope of the roof. Eyebrow windows that punctuate that gentle curve up to the steep peak of the roof. And woodwork everywhere, inside and out. These are my personal opinions, but you’re reading this and I’m writing it, which makes me right.
That was my sarcasm again. I picked it up a paragraph back and you didn’t even notice, did you?

So if you want a home with all the size and grandeur of Queen Anne without looking like it was decorated by prom queens and grandmas, Shingle style is definitely the way to go. They’re very popular here at Home Designing Service… I’m actually working on a few as we speak (err…. read). Contact us now to get in on the action.